Norm of the North: Keys to the Kingdom coming to DVD and Digital on February 12 from Lionsgate Home Entertainment.

Watch the lovable polar bear, Norm, come back in the cute sequel, Norm of the North: Keys to the Kingdom coming to DVD and Digital on February 12 from Lionsgate Home Entertainment. 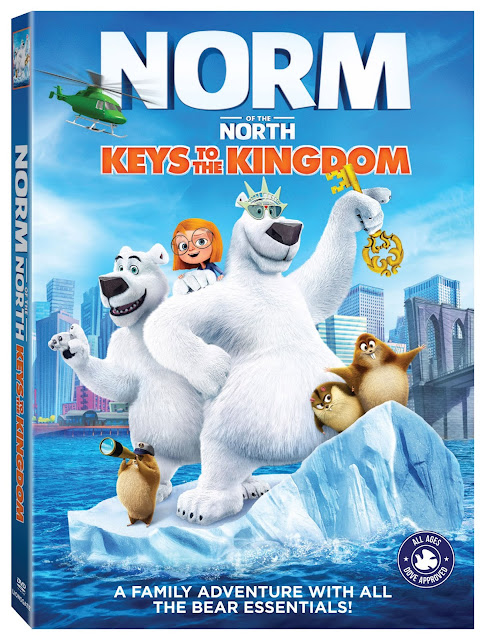 PROGRAM DESCRIPTION
A family adventure with all the bear essentials comes home when Norm of the North: Keys to the Kingdom arrives on DVD and Digital February 12 from Lionsgate. This film is currently available On Demand. This Dove Family-Approved sequel to the 2016 animated hit Norm of the North not only brings back Norm (the newly crowned polar bear king of the Arctic), but it also introduces all-new characters going on all-new, wild adventures. Perfect for the entire family, the Norm of the North: Keys to the Kingdom DVD will be available for the suggested retail price of $19.98.

OFFICIAL SYNOPSIS
Norm, the newly crowned polar bear king of the Arctic, travels to New York to accept the keys to the city. But Norm goes from hero to villain when he’s framed for a crime he didn’t commit! While he is trying to clear his good name, back in the Arctic a vicious bottled-water company has moved in and is starting to steal the ice. Norm must rely on his friends, both old and new, to clear his good name and help save his kingdom in a winner take all hockey match.

Norm of the North is back and he’s got the keys to the kingdom! Join in the fun with a few adorable activity sheets. Download them now: http://bit.ly/NormOfTheNorthKeysActivitySheets NORM OF THE NORTH: KEYS TO THE KINGDOM is on DVD and Digital now!

Posted by Popular Product Reviews by Amy at 5:47 AM