Get Yours HERE at Oceanview Publishing 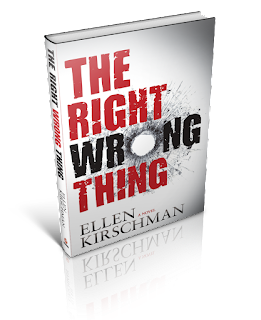 Get Yours HERE on Amazon

The Right Wrong Thing is a novel in the thriller/mystery genre.

She is the author of the nonfiction books I Love a Cop: What Police Families Need to Know,I Love a Fire Fighter: What the Family Needs to Know, and Counseling Cops: What Clinicians Need to Know, and Burying Ben, the first Dot Meyerhoff mystery. In this second novel,The Right Wrong Thing, Ellen offers insight into the stresses of being in law enforcement, and the rarely discussed, Post-Tramatic Stress Disorder, now associated with the job. While never condoning police brutality, the author is steadfast in her belief that, with very rare exception, people go into police work intent upon helping others. The issues of PTSD, fear while on the job, and the recent instances of hair-trigger reaction and brutality intertwined into this novel, make it's subject matter very timely. In law enforcement, hesitate or respond—either choice can spell disaster.

Officer Randy Spelling had always wanted to be a police officer, to follow in the footsteps of her brothers and her father. Not long after joining the force, she mistakenly shoots and kills Lakeisha Gibbs, a pregnant teenager. The community is outraged; Lakeisha’s family is vocal and vicious in their attacks against Spelling.  Suffering from post-traumatic stress disorder, and filled with remorse, Randy is desperate to apologize to the girl’s family.  Everyone, including the police chief, warns her against this, but the young police officer will not be dissuaded.  Her attempt is catastrophic. Dr. Dot Meyerhoff, police psychologist, plunges herself into the investigation despite orders from the police chief to back off. Not only does the psychologist’s refusal to obey orders jeopardize her career, but her life as well, as she enlists unlikely allies and unconventional undercover work to expose the tangled net of Officer Spelling’s disastrous course.

“Those looking for a meaningful story forged against the backdrop of a relevant social construct will enjoy going on this adventure.

Artful writing ensures a smooth and well-paced reading experience. Two examples: “as the commute traffic melts into the airport traffic” and “enormous mortgages precariously balanced on the undulating waves of an uncertain economy.”

Small victories have been won for women in the male-dominated world of police work, but it is still largely powered by men. The Right Wrong Thing is brilliantly written with this dynamic in mind. Those looking for a meaningful story forged against the backdrop of a relevant social construct will enjoy going on this adventure with Randy and Meyerhoff. Not only is this a compelling read, but it is profoundly realistic.
—ForeWord Reviews Magazine 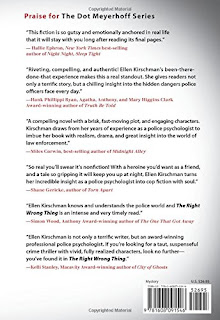 Posted by Popular Product Reviews by Amy at 12:33 AM