Minions: GET THREE ALL-NEW MINI-MOVIES ON BLU-RAY OR DIGITAL HD 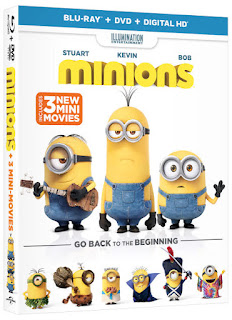 BRING HOME THE WORLD’S
#1 COMEDY OF THE YEAR FOR THE HOLIDAYS!
Minions
GET THREE ALL-NEW MINI-MOVIES ON BLU-RAY OR DIGITAL HD
ON DIGITAL HD NOVEMBER 24, 2015
BLU-RAY™ COMBO PACK, DVD AND ON DEMAND DECEMBER 8, 2015
FROM UNIVERSAL PICTURES HOME ENTERTAINMENT
“Minions are back and even better!” – Dave Morales, FOX TV
Universal City, California, October 6,   2015 – The breakout stars the world fell in love with in Universal Pictures and Illumination Entertainment’s Despicable Me global film franchise headline their own movie for the first time in Minions, available on Digital HD November 24, 2015, and on Blu-ray™ Combo Pack, DVD and On Demand on December 8, 2015 from Universal Pictures Home Entertainment. A much anticipated prequel to the unprecedented worldwide blockbusters Despicable Me and the beloved sequel Despicable Me 2, Minions is an immensely entertaining film for all audiences called “inventive and hilarious” by Julian Roman, Movieweb.com.  The Blu-ray™ Combo Pack and Digital HD also come with three all-new mini-movies and even more Minions everyone will want to watch again and again especially during the busy holiday travel season.
The story of Universal Pictures and Illumination Entertainment’s Minions begins at the dawn of time. Starting as single-celled yellow organisms, Minions evolve through the ages, perpetually serving the most despicable of masters.  Continuously unsuccessful at keeping these masters—from T. rex to Napoleon—the Minions find themselves without someone to serve and fall into a deep depression. But one Minion named Kevin has a plan, and he—alongside teenage rebel Stuart and lovable little Bob—ventures out into the world to find a new evil boss for his brethren to follow. The trio embark upon a thrilling journey that ultimately leads them to their next potential master, Scarlet Overkill (Academy Award®-winner Sandra Bullock), the world’s first-ever female super-villain.  They travel from frigid Antarctica to 1960s New York City, ending in ‘mod’ London, where they must face their biggest challenge to date: saving all of Minionkind...from annihilation.
Sandra Bullock (The Blind Side, Gravity) heads up an all-star voice cast including Golden Globe and recent Emmy Award®-winner Jon Hamm (“Mad Men,” Bridesmaids), Academy Award-nominee Michael Keaton (Birdman: (Or The Unexpected Virtue of Ignorance, Toy Story 3), seven-time Emmy Award-winner Allison Janney (“The West Wing,” “Masters of Sex,” “Mom”), Academy Award-nominee Steve Coogan (Despicable Me 2, Philomena), BAFTA Award-winner Jennifer Saunders (“Absolutely Fabulous,” Shrek 2), and Academy Award-winner Geoffrey Rush (The King’s Speech, Pirates of the Caribbean series).  The inimitable voices of the Minions are again voiced by Academy Award-nominee Pierre Coffin (Despicable Me, Despicable Me 2) who co-directs with Kyle Balda (Dr. Seuss’ The Lorax). Minions is produced by Illumination Entertainment CEO and founder Chris Meledandri and Janet Healy. Brian Lynch wrote the screenplay, and Chris Renaud serves as executive producer of the film.
Minions will be available on Blu-ray™ with DIGITAL HD and UltraViolet™ and DVD

BONUS FEATURES EXCLUSIVE TO BLU-RAYTM AND DIGITAL HD:
LIGHTING, LAYOUT AND EFFECTS - A look at the ways in which layout and lighting plays a big role in the emotion and motivation in the movie. Also see the ways in which they try to keep the 60’s vintage look and the challenges they face with very technical shots, where one shot can take weeks.


DVD BONUS FEATURES
Posted by Popular Product Reviews by Amy at 10:53 AM